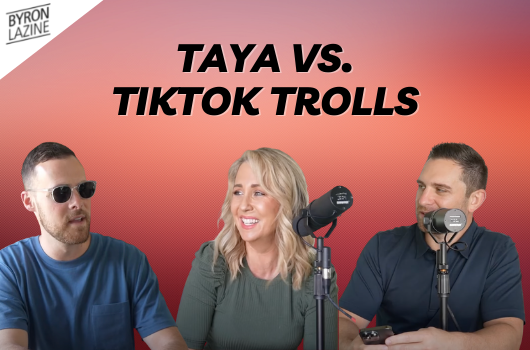 Last week, Byron and Eric (aka the broke agent) sat down with LA agent Taya Dicarlo. The trio discussed the TikTok trolls who labeled Taya a “Karen” and how the so-called “mass exodus” out of California is *actually* affecting the housing market. Taya offered her thoughts on the most-liked, misguided hate comments on her TikTok page, why TikTok has become such a toxic space when it comes to comment sections:

“I mean when these comments started rolling in. At first, I was like, it’s kind of cool. And then I was like, I think I’m gonna go cry. And then I was like, I’m going to fight back, and then I got off Tik Tok for like a week. I deleted the app from my phone, so I wouldn’t be triggered because people were being so vicious. Even those with strong self-esteem and a great head on our shoulders can let hate comments get to us. I think it’s okay to unplug and detox from social media and then come back in with a fresh head because you will go down this rabbit hole. It’s a slippery slope, especially when people start dueting your videos using out-of-context snippets. People either go on TikTok to laugh or to let their rage out. There are so many people seeking out conflict on that app.”

Here are a few of the most popular hate comments left on Taya’s videos:

The comment: “Karen vibes. She doesn’t understand that some of these people paying below market price might be families with no additional resources.”

Taya’s response:  “No one said to raise the rent. You’re adding your own narrative. We are talking numbers, not eviction. My mom rented the same house I grew up in for 20 years as a single mom. She had filed for bankruptcy, and we lived paycheck to paycheck growing up. And so that comment hit me because, on Tiktok, you have these little snippets. Things are taken out of context. And even though nothing in that video, that clip, or the longer podcast ever talked about encouraging landlords to evict tenants, people hear the word tenant and see a blonde white woman. They immediately think I’m all about the almighty dollar, kicking people out, and being heartless. All I was talking about was that realtors are lazy for not putting specific numbers on the MLS. I also think people have a trauma response when they hear certain buzzwords.”

Taya’s response: “Oh, man. I love these. We love Glennda, and whenever that happens, I tag her. I think it’s funny. Glennda and I live 1000s and 1000s of miles apart, and we are two different generations. Like yeah, we both have blonde hair, but she’s a successful woman in the south selling real estate in Atlanta, Georgia. I’m in Los Angeles. We can both provide value to people who follow us online and still not be ripping off each other. If anything, we inspire one another.”

Taya’s response: “10 people liked that comment and thought it was good information. It’s scary how much ignorance is out there.”

Want to find out what Taya REALLY thinks about the motivational grind culture content that’s common in real estate? Watch the full interview here. If you don’t want to miss content like this, sign up for Byron’s weekly newsletter.