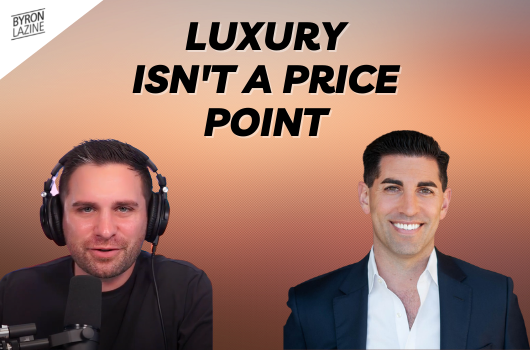 Last week, Byron interviewed the co-founder of the Grauman Rosenfield Team, Jon Grauman. Jon and Byron discussed stepping out of production as an agent, the mass exodus of people leaving California, and the announcement of Jon’s new show “wine and wisdom”.

Jon’s team is expected to do over $1 billion in sales this year, and he revealed his unique approach to never turning down business, despite being a luxury agent:

“We have a very simple principle: we’re not in the business of turning down business. And the other very simple principle that some people have heard me say before is that luxury isn’t a price point. It’s an experience. We try to focus on that and make that our mission statement. Some teams won’t touch a home worth under a million. Not us. Real estate is a relationship-based business, as is everything in life, and you never know when a $5,000 a month lease will lead to a $5 million listing, and it happens all the time. Many agents fail to realize that a person inquiring about a condo might own a $20 million dollar home and be looking to buy something for a son or daughter.”

Jon also had some insight about the impact that being born and raised in L.A. had on his transition into Los Angeles real estate:

“When you’re selling in big luxury markets, you’re playing at the very top. I feel grateful to have that opportunity because I was born into the city, right? But, that also comes with a lot of responsibility. If you’re selling luxury real estate in Beverly Hills and are fortunate enough to be born here, you’re so much further along than anyone else. There’s a lot of pressure that comes with that, and failure is not an option. If you’re not successful, so many other people with so many more challenges and disadvantages trying to get to where you are will gladly take your place.”