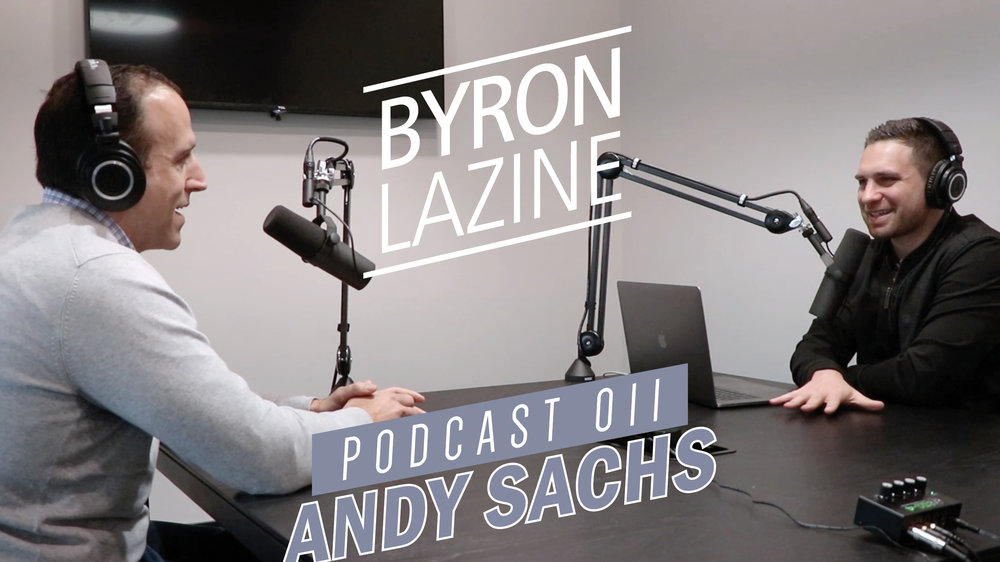 Eighty-seven percent of real estate agents quit within their first five years of the business. That is a staggering number, and there are numerous reasons why new agents don’t make it. One of the biggest reasons is the lack of support agents get. They are basically thrown into the industry after 60 hours in the classroom and passing a test.

On the flip side, building a team with the right people is a skill in itself. After years in the business and making it through the 2007 crash in the housing market, Andy Sachs has built The Around Town Team; a team that is in the top 1% in the nation with more than 54 million in sales in 2018. Meeting with Andy on episode 11 of The Byron Lazine Podcast, our conversation turned towards joining and building teams in real estate.

Why build a team?

For the first five years, Andy was a solo agent, working full-time in real estate and consulting companies in different industries. “I was full-time everything, so I was burning the candle at both ends,” he says. After a few years of this, his wife and a close friend urged him to pick one thing and to do it really well. That is when Andy committed to real estate.

“I built the team because I wanted something bigger than myself. It was never money driven. I always felt that (money) was a byproduct of success, and I wanted to be a part of something bigger.” – Andy Sachs

Having worked as a solo agent and as a leader of a top producing team, Andy recognizes the benefits of being surrounded by like-minded people to help through the ups and the downs of the industry. When working by yourself, you have to be your own manager, you have to hold yourself accountable, you have to deal with your frustrations on your own. Not to mention all the tasks you have to take on just to complete one transaction – everything from marketing, paperwork, scheduling, negotiating, prospecting, and communicating with clients.

Building a team means you are creating a support system for agents. “If you’re not around people in this business, if you’re not making the right connections – whether that’s agent-agent or to the client – how are people going to know who you are?”

A team in the top 1% doesn’t build itself. It takes time, trial-and-error, and patience. Andy states it has taken years of trying and learning and failing to find a great core group who are dedicated to growing their own careers. “I’m just fortunate enough they decide to do it with me,” he explains.

Managing a team is even more challenging than Andy thought it would be at first. After failing multiple times with mis-hires, missteps, and restarts, he was able to fine-tune his skills of managing and leading a team of people.

Knowing that not every new agent will find his team’s philosophy appealing, he doesn’t focus on attracting brand new agents with a fresh real estate license. He chooses to focus on building upon the skills his team already excels in.

“I would rather them have that taste of what it’s like to be out there on your own. I’d rather have someone else teach them how to do paperwork and things like that, then come to us and learn the real nitty-gritty of client service and prospecting.” – Andy Sachs

Making it through the housing market crash

The housing market crash of 2007-2008 hurt a lot of people in the real estate industry. Many agents dropped out for a couple of years and took on a different job until the market picked back up again. Andy and his team stuck with it through the crash, gaining valuable skills along the way.

Going through it, Andy didn’t always know if he was making the right decision for his family or his future. In retrospect, he says it was his best decision ever.

“The phone stopped ringing. Nobody was stopping into the offices. Nobody wanted to talk real estate. It was scary. We just started knocking on doors and making phone calls. We took all the basics and did them really well.” – Andy Sachs

Those basics paid off, and are still what drives his team to success every year. By focusing on the basics, Andy was able to help his clients and grow his business during one of the hardest times in real estate.

One of the lessons Andy has learned, both as an agent and a team leader, is that it is essential to focus on one or two skills and master them. Throughout his first years in the industry, Andy was trying to do it all – and wasn’t doing any of it particularly well. By dialing in on prospecting and serving his clients, Andy has helped his team grow from $0 to $54 million in closed deals.

This is another benefit of a team. When you work with a group, you can focus on the one or two things that you do really well, and use the support of the team for the rest. Finding the right team of people that share your focus and vision will take some time, but if you keep going back to the basics and focus on the skills that you do well, success will come. You have to believe in what you are doing, and be relentless in doing it over and over again, until you become a master.

My own personal growth comes from listening to and learning from people who are crushing it in the industry. I hope that as I share these interviews and insights, you will find as much value from them as I have.