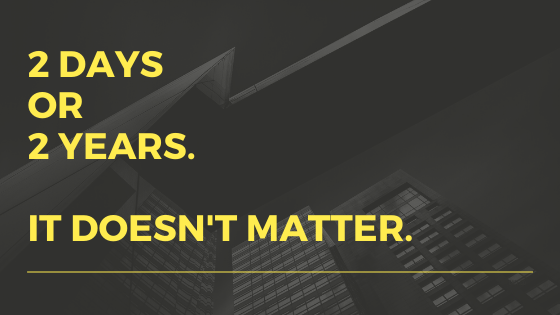 What if I told you there were two years left of living the way we’ve become accustomed to over the last several weeks? That for two solid years, nothing will change.

Would that change the way you work today? The effort that you’re putting in? Or the level of urgency you’re applying to your business right now? Would anything change?

What if I told you, there were exactly two days left of living the way we’ve become accustomed to living? In exactly two days, everything is going to go back to as we knew it in January and February. It’ll be like nothing ever happened.

When you think about your business, would you have some level of feeling like you missed out?

Like you didn’t seize that moment. With two days left, you’ll return to all the same issues.

Maybe you’re saying right now, you know what, it doesn’t matter if I have two days or two years, my market is closed down, I can’t do anything.

None of that Matters

Whether you’ve got two days, two years, or your market is shut down, you should be using this time to take a real step forward in your business.

No matter how slow your market, I know for a fact there’s a number of systems you’ve been thinking about, talking about, and planning on doing for so long. You could be working on perfecting those systems right now.

Instantly, the gun goes off, and they’re already halfway done with the race because they got everything they possibly could out of this time. They left everything out there right now, while all their competitors were wondering when this was all going to end.

No one knows when this will end. So whether it’s two days or two years, make sure every single day you’re doing whatever you can, whether that’s working deals in your market, or whether it’s making the best systems for your business than you ever imagined.

Two days or two years, it doesn’t matter. Put in the work.